Why does cancer strike some and not others?
You are here: 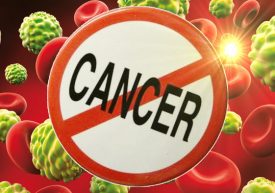 Have you ever asked yourself if cancer is a hereditary disease? Surprisingly, research has revealed that there is a close relationship between cancer and the type of lifestyle or body processes. Cancer is disease that is logical and has coordinated processes in which certain cells gain special abilities.

Before cancer can start, a precise sequence of tiny alterations must occur to change a normal cell into a killer. These alterations are triggered as a result of certain chemical substances and radiation that are carcinogenic (cancer causing).

Chemical carcinogens themselves, do not cause cancer; they modify cells before they can promote cancer. This process is called activation. The body’s defense mechanisms try to prevent carcinogens from entering cells, however at some point these carcinogens may enter the cells. Some people have enzymes that modify these carcinogens so that they can enter the cell’s central system (nucleus) and irreversibly bind to a person’s genes (DNA). However the cell’s DNA naturally tries to repair itself by clipping of the altered genes and blocking the cancer process. However, if the cell’s DNA defense mechanism is faulty and the cell divides with the altered genes, the carcinogen-modified portion may be copied abnormally. The cells then inherit the altered (mutated) gene. When the alteration concerns a critical part of the genes, the first step toward the cancer process is completed.

The cells with the altered genes begin to divide more rapidly than other cells of its type. Many chemicals act as promoters of the rapid division of these cells. Though not visible to the naked eye, these cells will be multiplying at a deadly rate. Strong promoters and cancer causing agents that aid in cancer cell multiplication are:

Promoted cells form an abnormal mass of rapidly increasing cells called neoplasm, aka ‘new growth’. These cells are classified as benign and malignant. Benign cancer cells form tumours that are localised and cells do not spread through blood or other body fluids. These cancer cells seldom kill their hosts if removed, before vital organs are compressed. Malignant cancer cells can travel through body fluids to infect other parts of the body. These cells are killer cells. Their ability to form secondary cancer masses is called metastasis. Some benign cells have the ability to transform into malignant cells. Cancer is an intimate enemy indeed. Have you ever asked yourself if cancer is a...

Everyday when you are up for breakfast, have you...

Have you ever asked yourself if cancer is a...

To take care of your body this season, strictly...

Everyday when you are up for breakfast, have you...